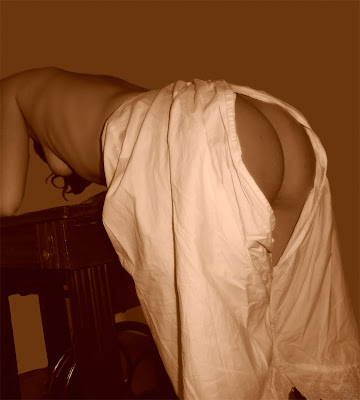 Hello, hello, and welcome back to our private little secret; my spanking blog!
Over the last few weeks I've brought you a number of interviews with significant figures around the spanking world (and there are more in the pipeline); today I have an interview with the producer of the one entirely indisposable blog that is out there - the one and only Chross!
Oh, and see that picture over there to the left? That is a picture of Chross's wife, taken by the man himself. So, not only does he write a blog that everyone in the spanking world reads, he has an extremely hot wife too.
Some guys do have all the luck!
And, what's more, he's a gentleman who is willing to give of his valuable time to answer a few impertinent questions. So, here we go!
1. Your blog is based around the idea of the male top; have you ever tried the bottom role? It has been suggested that having been spanked makes a top better at his role. Do you have any views on this?

Not really. I got a few whacks from different implements now and then from my wife - she just wanted me to know how that felt ;). But I am not up for more really.
Generally it's not a bad idea to know what sort of pain you are inflicting during a spanking and how much of it.
But I think it's far more important to be able to read your partner's reactions, knowing when it's too much or when you may (or even should) step it up a bit.

2. Was it a difficult decision to decide to produce your blog in English, rather than German?

No, actually not. I never really thought about setting it up in German.
German would have limited the possible readership of the site very much and I was visiting English blogs and sites all the time anyway.
I also like the English language a lot and read a lot of English books. So the language barrier was not very high and I thought it would be
a good exercise for my "active" language skills, too.

3. Forgive my ignorance, but there are obviously active and well known spanking scenes in both the US and the UK;
how does the German scene compare? I get quite a few readers from Germany (my third highest number in fact).

4. The Spankings of the Week feature is massively influential; what criteria do you use, and do you ever get recommendations?

It has become a somewhat frightening feature really.
It eats up a lot of my time, especially on Fridays. The main criterion has ever been and will ever be: Do I like the post? If I do, I'll include it.
Beyond that the next question is: Do I believe a lot of people will like it or be interested in it? Then I'll include it, too.
That sounds simple, but with the growing popularity of this feature it really isn't.
You have to restrain yourself from including stuff for other reasons - e.g. the general popularity of the blog, sympathy for the author and such.
Nowadays there are so many sites producing good stuff that I sometimes even have to remove items from the list in a second step. Otherwise it would be too long.
After all it is supposed to be a hand-picked selection, not a complete inventory sheet.
In spite of its popularity I seldom get mails suggesting an entry. I don't know why. Maybe people are too shy or think I'd consider it insolent.
But I'm always open for suggestions. You know, I take a look at a lots of blogs each week, but I cannot cover them all.

5. What do you consider to be the Holy Grail of missing spanking scenes?

There is the internet legend that an uncut version of "9 1/2 weeks" exists in which Kim Basinger really gets spanked.
Of course there is no proof whatsoever and it's all down to a matter of belief - just like the Grail.
I don't think this version exists, but if someone could come up with it....

6. I think I first came across your blog in a search for mainstream spanking material;
given that you still champion this, does your taste run to the milder end of the spanking spectrum?

Mhm, tricky. But the answer is no. When I started exploring this strange fetish of mine, canings struck me as way too brutal (and I wasn't even aware of the Russian stuff).
Nowadays that's very different. Evolution of kink, I guess. Or maybe just stopping being afraid of one's desires.
So speaking of spanking porn I do like the whole spectrum. If it is properly set-up, with proper acting and a good script, I can be very happy with a hand spanking scene, too.
But nothing wrong with a good strapping or caning. Anything drawing blood is a no-go for me, though.
I still love mainstream spankings! Pretty actresses spanked, nothing wrong with that!
And every mainstream spanking proves that this thing we do is not too obscure to be shown in regular media.
Plus, there has been an increase in mainstream spankings lately. Good for us and the general acceptance of spanking.

7. Do you ever join paysites, and if so, which ones do you like best?

Only very rarely. It's not about money or the stuff offered. It's more about my own paranoia ;).
If any company would offer an anonymous method of access / payment I'd be happy to join it at once.
There are easy ways to do this (like the pre-paid card kind of stuff, they have systems like this in Germany), but I'm not sure if that might not present a legal problem (sufficient protection of minors?).
I'm not so much worried about the sites abusing the saved personal data - but I have worked for a rather large website and know about the possibility and perils of being hacked.


8. I have a stock, although kind of pretentious question;
In a book I was recently reading the following statement appeared
"No one should ever impose their own perceptions of fulfilment on anyone else". Do you think this applies to the spanking scene?

Of course it does. Know your boundaries, respect the boundaries of others. If you can't talk someone into getting spanked, either respect it or look for a partner that
is willing to submit to a spanking.

9. Have you ever wanted to appear in a spanking video? Who would you like to spank?

Thought about it, yes. Really wanted to, no. Privacy factor again, I guess.
If I had to pick just one from all those gorgeous spankees, it would be Amelia Jane Rutherford I guess.
Or let's me just discipline a whole school class of spanking models like in Exclusive Education :)

10. I have a fascination for one to one girls; have you ever paid to spank someone? Would you consider it, and what would your wife think?

I don't think my wife would mind me spanking another girl - but here a general warning:
steer clear of ex-girlfriends though, wives can be veery touchy as far as those are concerned ;)!
But I would not book a session with a model and pay for it - neither would my wife approve of this, I'm pretty sure.

11. You state that you are "happily married to a beautiful brat". Sincere congratulations. Was your wife into spanking before you met?

Sometimes she still claims today she's not into it ;). Although she just tells me that this is - of course - not true. She did have some submissive and violent fantasies when I met her, but is not the typical born spanko.
She is quite open to a lot of things, though, that all point to the Domination/Submission direction - thankfully including a good, hard spanking.
And she often demands one, too.

12. How long each week to you spend on your blog? Have you ever considered trying to make it into a commercial enterprise?

Well. If you include maintenance work: at least 6-10 hours a week, I'd say.
I am a pretty effective worker and have written little scripts to simplify things and speed them up.
Otherwise it probably would be impossible to balance work, family life and the site.
I have always intended this blog to be non-commercial although I have received various offers for advertising.
I can make a decent living without the additional money. I believe this also contributes to the reliability and credibility of the site.

13. Just being nosey (actually that's true of most of these questions) but how many page views a week does your blog get, on average?

Not much of a secret here. I believe the stat counter is even publicly accessible! Alltime since installing the counter a couple of year ago the site has registered an average of 17.500 page views a day.

14. Vanilla question; are you a reader, and can you recommend a book to us?

Yes, I read quite a lot. At the moment I read "Altered Carbon" by Richard K. Morgan, but most of what I read is fantasy literature.
Lots of great authors I read lately to recommend, like Brandon Sanderson, Brent Weeks, Joe Abercrombie or Peter V. Brett.

15. Another one (sorry, but I like to know if someone I follow has interests in common with me); do you follow sports at all, and if so, what team/s do you support?

Well, being German I'm of course interested in football (read: soccer if you're American) although not as enthusiastically as lots of my male fellow citizens.
I am a huge fan of the NHL, though, and have been a Pittsburgh Penguins fan since I started following the league in the 90ies.

16. Another of my regular questions: perhaps I've been lucky in the people I've interacted with, but it seems to me that most spankos are particularly
intelligent and polite; what do you think about this?

Personally, I second that impression. But then, female blogger sometimes publish the mails they get and that illusion is smashed to very little pieces.

17. A final question; do you have any plans to change your blog at all? (I'm not suggesting that it needs it, but, you know, entropy abides, and all that).

Right now: No. I am pretty happy with how things are going and looking. There are a few bugs to be taken care of (search function in the Showcase e.g.),
but otherwise there is no urgent need for changes.
Maybe a litte redesign of the database pages in the future. The Movie Database has really grown to a huge size by now....
Many thanks to Chross for taking the time to answer my questions so fully, and honestly. I think it's nice to learn a bit more about one of our more private public figures.
All the best
Tim
Posted by Tim the Tum at 04:12